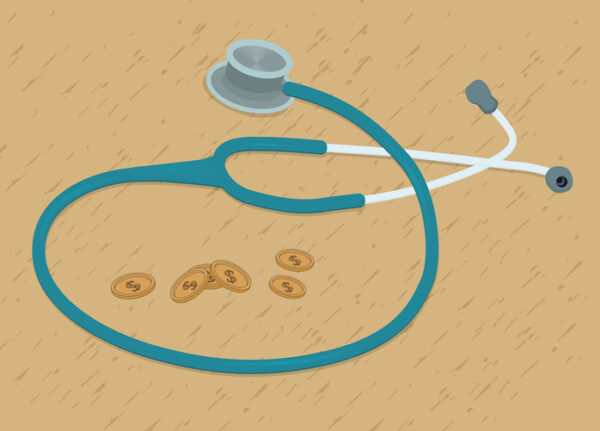 Stethoscope and coins on the wooden table vector illustration

Nearly three decades of research show that doctors are influenced by the payments they get from drug companies, according to a new review published in the Annals of Internal Medicine.

Doctors write more prescriptions for the drugs made by companies that pay them, even if the drugs are less effective or are equally effective but more expensive than the alternatives, according to the review, which is based on 36 published studies dating back to 1992.

“Taken together our results support the conclusion that personal payments from industry reduce physicians’ ability to make independent therapeutic decisions and that they may be harmful to patients,” wrote the authors, a team of doctors and researchers from Memorial Sloan Kettering Cancer Center in New York City. “The medical community must change its historical opposition to reform and call for an end to such payments.”

The authors were supported by a grant from the National Cancer Institute. However, they acknowledged that a ban would likely draw little support from doctors. Most believe that industry gifts do not exert any influence, the authors wrote.

“Our findings suggest that this belief is not well-founded.”

The review is the latest in a string of articles and studies arguing that doctors are impacted by the money they receive from drug companies, whether in the form of meals and entertainment or consulting fees and honoraria.

Though they are often controversial, the payments are common. Roughly two-thirds, or 67%, of physicians received some kind of payment between 2015 and 2017, with the number reaching 80% in specialties like medical oncology and orthopedic surgery, according to the review in the Annals.

While a ban may be off the table, doctors and drug companies have taken steps over the years to police themselves and reverse perceptions of bias.

The ethics code of the American Medical Association, for example, says physicians should “decline cash gifts in any amount from an entity that has a direct interest in physicians’ treatment recommendations.” The code also warns doctors to decline any kind of compensation tied to prescribing drugs or devices.

In response to earlier rounds of criticism, the Pharmaceutical Manufacturers Association updated its voluntary code in 2008 to restrict some of the practices that gave rise to concern, such as hosting meetings at restaurants between doctors and sales reps.

In recent years, efforts have focused on increased transparency. The Affordable Care Act, for example, included provisions requiring public reporting of any financial transfers greater than $10. The first data was published in 2014 by the Centers for Medicare and Medicaid Services under a program called Open Payments.

Transparency hasn’t made much of a difference, one of the new study’s authors, Dr. Aaron Mitchell, wrote in an emailed response to questions. Nonetheless, other efforts may have left a mark.

“If anything, I would think that payments probably matter somewhat less today, because we have cracked down on some of the most egregious forms of gifts,” Mitchell wrote.